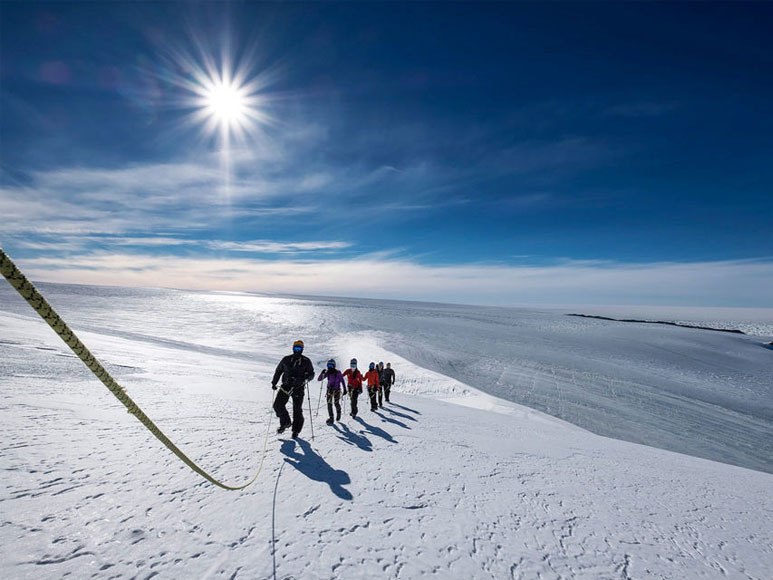 Landing in Antartica was more than emotional, no words can express the feeling of reaching the last ultimate virgin continent on Earth, the people joining this expedition was almost in tears when we we stepped out and touched the land of the Imperial penguins.

Antartica is a continent of extraordinary natural beauty, physical purity and serenity. Many of its features are simply unique. Antartica is basically 97% snow, it contains 90% of the worlds ice as 70% of the world’s fresh water. If the sea waters melts one day, the sea level could rise up 80 m and destroy many cities.

Around 200 millions ago Antartica was joined with Australia, Africa, South America, India and New Zealand in the supercontinent Gondwana. Around 20 millions years later Gondwana began a slow process of breaking into the pieces ( the continents ) we recognise today, by moving each into the present positions. Antartica arrived to the southern pole around 100 million years ago and had forests with mammals and dinosaurs. Fossil evidence includes conifer, fern and reptile species the same found in India or Africa ( even evidence of marsupials have been found in Antartica).
Today the continent has a diameter  of about 4500km and an area of about 14.2 millions sq. km ( 1.4 times the size of USA). It is classified as desert because is the most isolated and arid continent on earth.
The rocks of East Antartica are at least 3 billions years old, among the oldest on Earth. I feel very lucky to have walked along and hold in my hands some of these rocks.

Our camp was not far from the Indian base, called Maitri. Actually we decided to pay them a visit. The indians were so happy to see some other humans around that welcome us with a hot Indian Chai tea and even traditional cakes. We had an interesting conversation with the scientific team and thank even the cook for their warm welcome. Our hike back to the camp was even more beautiful with some warm tea in the stomach.

The following days we followed our guides discovering each day a new site, doing extraordinary 8 hour hikes. We sadly saw that some areas were melting fast and earlier than previous seasons.

When the right weather conditions were confirmed to fly, we took the artic plane down to the Polar Plateau to the American Base, the Amudsen Scott South Pole Base.

The weather there was not as mild as in our camp, we went from -14 C down to -24C. Sleeping there was a challenge, we couldn’t take off any clothes in our tents, you will just simply sleep with everything on!

Roald Amundsen was the first explorer in reaching the geographical South Pole in 1912. Even it was over 100 years ago, the South Pole still embodies myth, hardship and glory. Today it is topped by a high-tech station surrounded by cutting-edge astrophysical observation equipment (including neutrino detector array buried aprox. 2 km below the ice). Amundsen polar camp remains buried under the annual accumulation of snow and by now should be over a dozen meters bellow the snow surface.

The isolation at the Pole can be overwhelming from mid February till late October there is no flights to get out, so for 5 months you are cut off the world. Wintering in the Pole is in some ways similar to being an Astronaut, but with a bit more room to walk around. That is what Terry Virst, a NASA astronaut that accompanied us in this expedition had a corresponding feeling at the plateau as when he was in space. Here email and internet access helps, at least, break the isolation. The Station has also an Iridium satellite telephone, that produces high quality calls to keep contact with families or communicate with the other bases in Antartica.

Interestingly, the Station gets its water from a well that is 120m deep. A large pool of water is created by the waste of heat and this water can be pumped out. Another curiosity, despite the thousand of cubic Km outside of ice they still have an ice machine for drinks. They have lots of recreation areas in the Station, even is somewhat limited, they have a gym, including a basketball court, a library with over 6000 videos and books, a music room with all kind of instruments from a trombone to an electric guitar… But the most popular hangout is the hydroponic greenhouse, were they grow plants, where tending the plants becomes a welcome diversion as sitting in the sofa ( available to relax and feel the smell of grass ). A real luxury in Antartica.

Temperatures on the Polar Plateau range from – 82C to -14, winter winds can plummet to -110C. We were lucky and happy with the -24C temperatures. Our expedition gave us enough equipment to put on top of ours, but sometimes was difficult to recognise each other, I felt like walking in the moon with an astronaut suit!

These 15 day expedition will remain always in my memory, not only as the most amazing experience I have lived, but for the richness  I take in my heart of such beauty, purity and serenity moments.