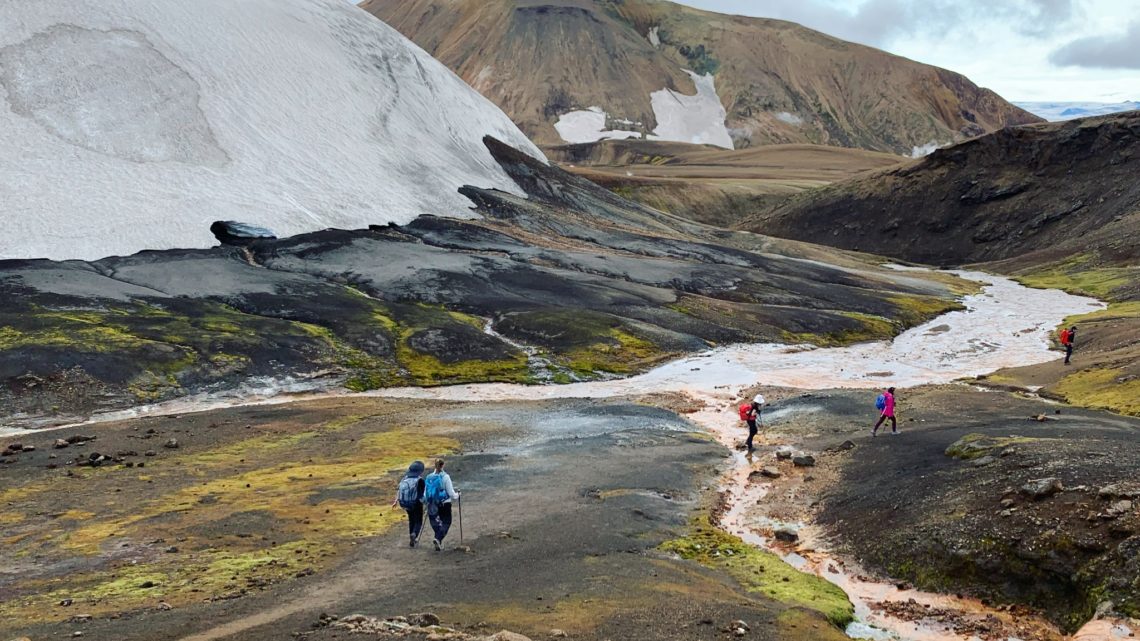 Iceland: The land of fire and ice

Many people believe the ninth century “Viking Naddod” is the first human to set foot on Iceland. But others trace Iceland’s human history back to 325 BCE and the greek explorer “Phyteas”. Phyteas returns from exploring Western Europe with an account of a place “six days sailing north of Britain, beyond the borders of the known world and close to a frozen sea” He describes how “the sun stayed above the horizon all through the night” He called this place THULE.
Historians believe his account refers to Iceland.

This past summer, august 2019, I was privileged to get involved with an amazing group of adventurous women to cross Laugavegur trail, one of the most active landscapes in Iceland in terms of volcanic activity with an incredibly topographic variety: from ice to black sandy deserts, obsidian lava fields to infinite moss extensions, rivers, glaciers, volcanos, and rocky mountains hiding explosive geysers…

Laugevegur is considered one of the top 5 trails in the world for its beauty and unbelievable diversity, but what it made the trail even more incredible was the cause we did it for: to raise awareness and funds for climate change and environmental consciousness. Personally I felt very proud to participate in that “only women team” and very privileged to discover one of the most geologically active places on earth.

A few weeks before our arrival in Iceland, Icelanders were mourning for the lost of a 700 years old glacier, OKJOKULL, a real tragedy, but what I want to emphasize here is that actually only 10% of the glaciers still exist in ICELAND, mainly in the southern and central Highlands. All major glaciers in the northern territories were lost. We have only 9 years to revert the process of climate change. The actual global warming and environmental degradation will lead to the extinction of all glaciers in Iceland in less than 150 years.

Nowadays Icelanders are trying to resurrect also their lost forest that the first settlers cleared in a few centuries. Actually 80% of the trees disappeared in the island with the first human settlements altering drastically Iceland’s ecosystem.

Laugavegur, was originally formed by an eruption in 1477, it is definitely a terrain for avid trekkers, our team covered 80 Km in four days, marching for hours through all king of landscapes: we saw sulphuric acid pools, lunar surfaces, majestic waterfalls, magical obsidian stone parks, vivid green moss fields. A real unique geothermal wonderland that ended up also with some personal challenges like having to cross barefoot rivers at 2 C (this was summertime in winter you can’t come even close as all is covered in snow). I felt my feet were at a point of freezing while crossing, couldn’t feel my calfs. This was for me the most challenging part, not the blisters.

We hiked 10-12 hours per day, always happy of reaching the camp by the end of a fantastic day trek, we would build our own tents and have a nice hot soup with carbs while chatting along till midnight with a nice glass of wine. Temperatures will drop to 2-3 ºC at night and 5 to 6 ºC during the day, we walked mostly under sunny skies, sometime we felt the strong winds and the rain, but have to say, we were quite lucky with the weather. The time window frame to explore Iceland is only during summer and even then weather is very changeable. Actually we couldn’t finish our itinerary as weather closed and had to plan an early evacuation as the winds started to pick up around 50km-h. But the experience after an unforgettable trek would remain in our souls for lifetime.